06-11-2015 SPAZIOFMGPERL’ARCHITETTURA opens the HACER CIUDAD - México 2015 exhibition in partnership with Academia Nacional de Arquitectura Capítulo Monterrey and with the participation of Versitalia, Archdaily and Floornature.

At 18:30 on June 11 SPAZIOFMG opens the doors of HACER CIUDAD - México 2015, an exhibition focusing on particularly significant architectural projects built in Mexico by well-known professionals, members of the Academia Nacional de Arquitectura Capítulo Monterrey. HACER CIUDAD - México 2015 presents a selection of 18 urban landscape projects offering interesting food for thought on the relevance of the discipline and the changes currently transforming Mexico's urban panorama.

The projects on exhibit have all been built in the Monterrey metropolitan area, capital of one of the country's wealthiest states, a young modern city that looks toward the future without forgetting its roots and cultural identity. Integration with and respect for their natural and architectural surroundings, positive impact on social dynamics and promotion and redevelopment of the social fabric: these are the key selection criteria adopted by a special jury including a commission from ANAMTY (Academia Nacional de Arquitectura Capítulo Monterrey), representatives of the Floornature and Archdaily portals, SPAZIOFMG curator Luca Molinari and the management of the IRIS Group's Mexican company, Versitalia. “CONOCER, DAR A CONOCER Y RECONOCER LA ARQUITECTURA SOBRESALIENTE”: this is the Academia's motto, and it is perfectly aligned with SPAZIOFMG's mission of international promotion and publication of architectural projects with a special focus on the social and environmental dimensions of their context.

HACER CIUDAD - México 2015 offers a new perspective on the dynamics of urban and architectural evolution overseas, placing the accent on the architect's responsibility in designing places that help people to meet and grow as a community. Via Spaziofmg 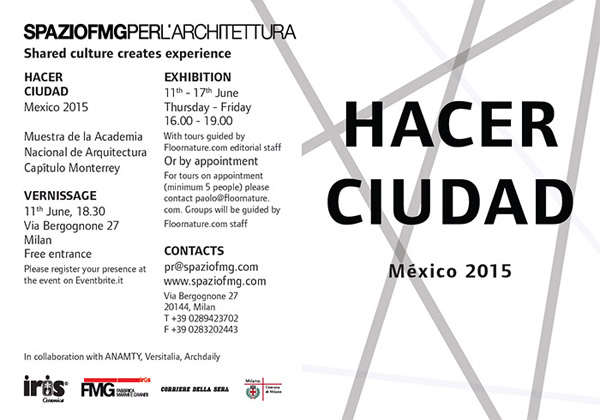