After the monographic exhibition on Cini Boeri, SpazioFMG per l’Architettura closes the year 2015 with a look at another great Italian from the world of architecture, design and art. December 17 2015 marks the opening of the exhibition entitled Nanda Vigo: ‹‹Opere abitate da opere›› (“Artworks inhabited by artworks”) 1959-1972, a retrospective of the Milanese designer’s interiors of the ‘60s and ‘70s.

Obtain accreditation for the event at:

Opening hours:
December 17 to February 12 2015:
Thursday—Friday 16:00 - 19.30
with guided tour by floornature.com editorial staff
To make an appointment: (for groups of at least 5 people) write to Paolo Schianchi paolo[at]floornature.com.

SpazioFMG per l’Architettura continues to present big names in modern and contemporary architecture in Milan: after Cini Boeri, the gallery now focuses on architect, designer and artist Nanda Vigo, who has been working in the city since the ’50s and is still active there today.

A multifaceted, versatile artist, Nanda Vigo has played a key role in Italian art since the’60s and ’70s, when she worked with authoritative artists such as Giò Ponti and Lucio Fontana.

At 18:30 on December 17 2015 SpazioFMG inaugurates Nanda Vigo: ‹‹Opere abitate da opere›› (“Artworks inhabited by artworks”) 1959-1972, a solo show illustrating Vigo’s wide-ranging career with a special focus on her work as an interior designer.

Iris Ceramica and FMG Fabbrica Marmi e Graniti’s gallery and showroom will feature a series of vintage photographs representing six of the architect’s iconic monochromatic interiors, including the “Zero House” (1959-62), the house “Scarabeo sotto la foglia” (Beetle under a Leaf)(1965-68) – designed by Giò Ponti with interiors by Vigo – and the “Black House” (1970).

The images are accompanied by a series of original objects kindly provided by the Nanda Vigo Archives, including the “Golden Gate” lamp designed for Arredoluce (1969-70), the “Top” sofa for Fai International (1970) and the “Due Più” chair for More Coffee (1971).
The narration of these objects is enriched and supported by a prestigious series of photographs by Aldo Ballo, one of Italy’s best-known design photographers. 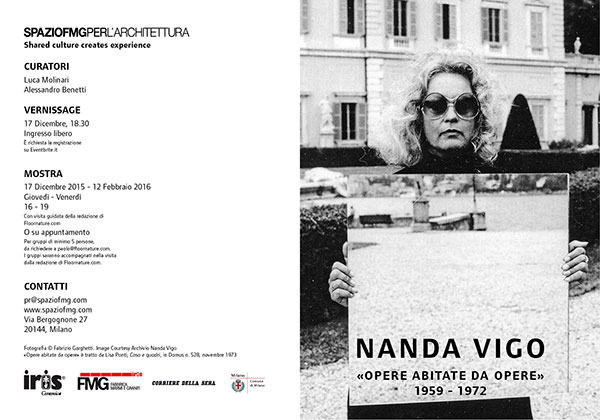