SpazioFMG per l’Architettura celebrates its first 10 years by inviting contemporary Italian architects to participate in a major group exhibition December 15 through February 17, literally putting a face to their names.

Opening:
Thursday – Friday 4 – 7 pm with guided tour by floornature.com editors.
To make an appointment for a tour outside these hours: Paolo Schianchi paolo@floornature.com  (groups of at least 5)

SpazioFMG per l’Architettura celebrates its first 10 years by inviting contemporary Italian architects to participate in a major group exhibition December 15 through February 17, literally putting a face to their names. The exhibition entitled “CONTROCAMPO. Gli architetti italiani ci mettono la faccia”, or “REVERSE ANGLE: Italian architects put a face to their names”, offers a new perspective on the world of design, focusing on the people who spend their days designing, building and writing about the best Italian architecture, immortalising them in an amazing group portrait for the very first time. The exhibition, curated by Luca Molinari and Alessandro Benetti, opens at 18:30 on Thursday, December 15 at SpazioFMG in Via Bergognone 27, Milan. Free admission.

In 2007 SpazioFMG per l’Architettura first opened its doors to the public with an exhibition about Michele De Lucchi’s Adjara Towers. Since then, more than 50 events, including exhibitions, talks and conferences, have brought life to Iris Ceramica and FMG Fabbrica Marmi e Graniti’s gallery in Milan.

Stefano Boeri, Mario Botta, David Chipperfield, Herzog & de Meuron, Bernard Khoury, Land, Francesco Librizzi, Piuarch, Benedetta Tagliabue, Tamassociati and Nanda Vigo are just a few of the great masters and emerging young architects, designers and landscape architects from Italy and all over the world who have helped to make the first 10 years of history of SpazioFMG per l’Architettura.

“CONTROCAMPO. Gli architetti italiani ci mettono la faccia” is an unusual event curated by Luca Molinari and Alessandro Benetti, a unique exhibition focusing not on the projects themselves but on the people who conceive, design and build them every day, making a significant contribution to improvement of the environment we all live in.

Gallery curator and scientific director Luca Molinari comments on the upcoming exhibition, which will be open to visitors from December 15, 2016 until February 17, 2017:

“’Controcampo’ is a provocation and at the same time a necessary act providing a simple, immediate representation of key figures in Italian architecture.

We don’t think architects should be on the cover of all the magazines, but we do believe in the profound civic value of the work done by the best professionals in our discipline every day, behind the scenes of the architectural projects, which are in actual fact their everyday work, with all the resulting logistical complications, dialogue and mediation with the many other people involved in the project. And so we wish to inaugurate SpazioFMG per l’Architettura’s second decade with a different point of view, focusing, with curiosity and without modesty, on the “reverse angle” of our buildings, in an unprecedented group portrait made up of hundreds of faces, some well-known and others not so familiar, forming the backdrop for a series of meetings and round tables addressing the most relevant themes in architecture in our country today.”

More than 200 faces come together in a highly varied, rich group portrait covering the two main walls at SpazioFMG per l’Architettura. Each photograph is matched with a book the person portrayed particularly likes, forming a second landscape, made up of the words and thoughts that nourish and stimulate reflection by Italian architects. The volumes are arranged on a nine metre long table in the middle of the gallery, forming the fulcrum and centre of gravity of the exhibition space. Made of an FMG MaxFine slab only 6mm thick, the long table-top looks like a thin blade suspended on four practically invisible supports.

As a tangible contribution to the education of tomorrow’s architects and designers, when the exhibition is over SpazioFMG will donate all the volumes to the library of the architecture faculty of an Italian university.

With this group exhibition, SpazioFMG per l’Architettura celebrates the start of a new decade, once again confirming its role as a platform for communication, meeting and discussion for the best Italian architecture. A format that could perfectly well be exported to celebrate big names and new faces in architecture all over the world. 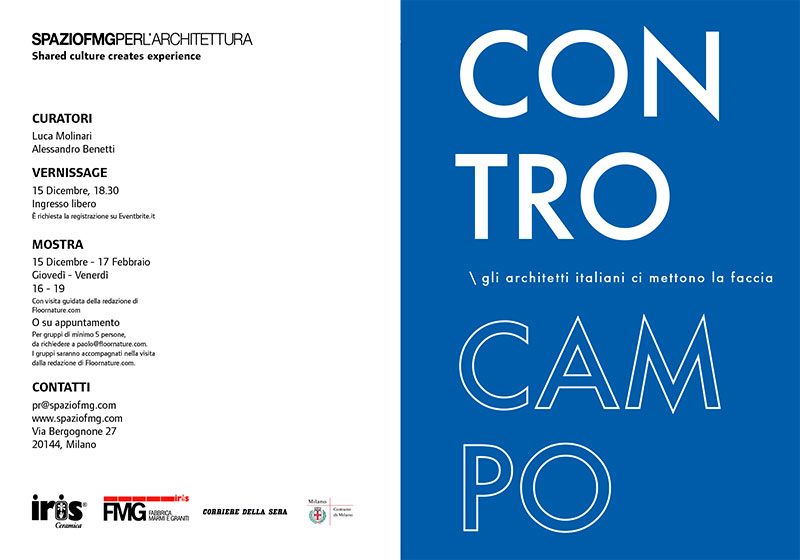