During the Fiera Internazionale del Mobile – Milan’s furniture fair – and the imminent opening of the Universal Exposition, SPAZIOFMGPERL’ARCHITETTURA is expanding its research horizons and inaugurating FUTURECRAFT, the first appointment in the Tomorrow by Design series.

Click on the following link to register for the event:

During the Fiera Internazionale del Mobile – Milan’s furniture fair – and the imminent opening of the Universal Exposition, SPAZIOFMGPERL’ARCHITETTURA is expanding its research horizons and inaugurating FUTURECRAFT, the first appointment in the Tomorrow by Design series.

FUTURECRAFT, the exhibition underway from 13 April to 29 May 2015, aims to investigate new areas of action in the design sector, going beyond the simple perception of buildings to make way for the fusion of different methods and technologies.

Featuring in the exhibition are the professional worlds connected to Carlo Ratti, architect, engineer and researcher, as well as curator and designer of the Future Food District in Expo 2015. MIT Senseable City Laboratory, Carlo Ratti Associati, Superpedestrian and Makr Shakr represent the multidisciplinary approach laying the foundation for the Tomorrow by Design series.

FUTURECRAFT greets visitors with a range of scenarios that integrate architecture, design and environment with the use of cutting-edge digital technology. A pathway allowing experimentation with an imagined world that keeps the individual at the centre of an ecosystem redesigned to optimise the quality of living.

Luca Molinari, scientific head of SPAZIOFMG and curator of FUTURECRAFT, offers an overview of the series and introduces the first appointment: “With FUTURECRAFT, the first episode in the Tomorrow by Design trilogy, SPAZIOFMG is opening its doors to ideas and projects that go far beyond the traditional area and idea of buildings. The gallery makes itself part of the Universal Exposition system, turning into a research laboratory where the brightest ideas converge to design the future of the Planet. At the same time, it opens up to the city and turns into a welcoming, relaxing location, just like a home. Carlo Ratti, who designed one of the core forward-looking theme areas – the Future Food District – for the Expo is the first of the designers asked to interpret this delicate theme. SPAZIOFMG describes the complexity of an architect and engineer who invites input from all fields of knowledge into his professional practice and turns them into projects. He does this through the futuristic but real, functioning objects he invents: like the wheel that explains to the cyclist how to get the most out of his pedalling, through to the plotter that can write (and erase) vertically, in addition to the infinitely reconfigurable side table-cum-chair designed for Cassina.”

For visits by appointment
Paolo Schianchi
paolo@floornature.com
(for groups of 5 people and more) 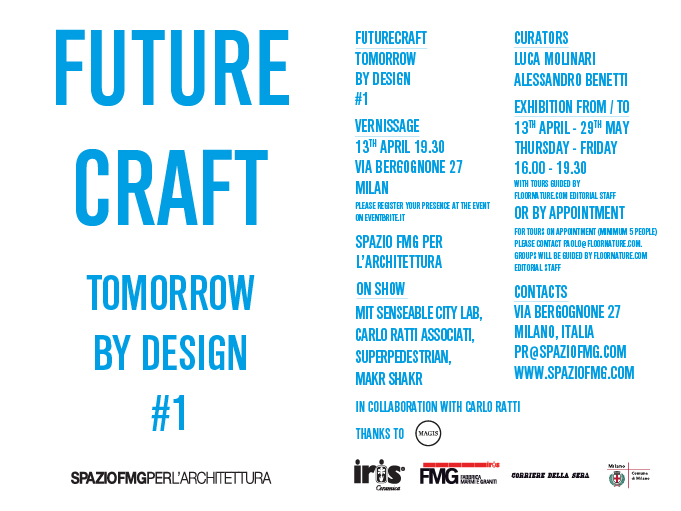